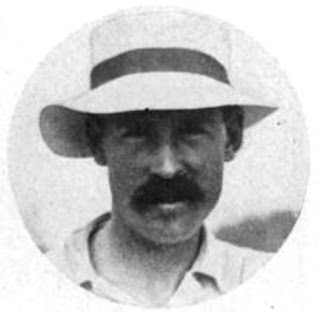 ‘The first recollections I have are of playing up and down the road, with a stick, with a knob or crook at the end, and trying to drive along a round pebble, in imitation of the golfers. It must certainly have needed some accuracy.’
George Sargent, Article in The American Golfer 1909


Idly flipping through the pages of a golf collectables book at Gloucester antiques centre recently, I paused and looked again. There in black and white was the signature of my great-great-uncle George Sargent. I had never met him and until my sister began a family tree a few years ago many of our ancestors and stories had been an unspoken mystery.

The book states that George’s signature was worth $350 in 2004. Further down the list, keen golfer Frank Sinatra’s signature is listed at $100 less.

Using census, birth, marriage and death, and marriage records we had discovered that George was born at Brockham, Surrey in 1882, was a professional golfer, and had won the US Open in 1909. But what had lead him to America? Why is my sports loving father so disparaging about ‘glof’ as he terms the game, and why did I read about George introducing the use of motion pictures to study the golf swing when there appeared to be no obvious proof that he had done so?

The family moved to Epsom soon after Rose was born and George began imitating the golfers at the nearby Epson Down Golf Club, seeking out little round stones and straight sticks with a crook at the end just the right size to practice with.

George often popped onto the course and soon became a caddy, carrying clubs, fetching stray balls and carrying out various duties. His father William worked hard, long hours as a maltster to support the family. The pressure on George to earn more money in a stable job must have increased when brother William was born in 1894.

Golf was George’s passion, his life, and we can only imagine the family conversations that I suspect lead to the families disparaging ingrained view of golf as a profession.

George was hardworking, willing to learn and had obviously made an impression at the club. Thomas McWatt took the enthusiastic youngster under his wing, and before his twelfth birthday George had begun a six year apprenticeship as a golf club maker with the professional golfer.

By the age of sixteen George was flourishing at the game and McWatt, along with famed golfer Harry Vardon, encouraged him to a quite exceptional standard and he later proudly declared that ‘I could hold my own with any scratch man’.

Harry Vardon took George to Canton golf club up in Yorkshire where he developed his game, learned how to teach golf and how to manage and design golf courses.

He then moved back to Esher, Surrey to be coached by Sir Edgar Vincent. His first game as a pro was at Muirfield in Scotland. By the end of the first round he was in fifth place. It created quite the buzz and Harry Vardon later commented that everyone was walking round asking ‘Who the blazes is this Sargent?’.

Great things were predicted for the young prodigy. After moving to Dewsbury in Yorkshire and winning several prizes, George competed in the prestigious ‘Open Championship’ at St Andrews, finishing in an astonishing fourth place.

By 1905 George felt he had outgrown the UK pro circuit and moved to the Royal Ottawa Golf Club in Quebec, Canada, leaving behind his pregnant mother and unmarried pregnant sister.


In 1907 George returned to England to marry Beatrice Marguerite Pearce in Battersea and she joined him in Ottawa later that summer.A fruitful few years followed and George became a pro in New England at the course he had helped design - Hyde Manor Hotel in Vermont.In 1908 their first son, Alfred, was born in Quebec and in 1909 George left Beatrice in Liverpool as he sailed for New York on The Mauritania.

George put his time to good use practising, but fared very badly at the US Championship at Myopia. Feeling he could do nothing right he tore up his card in disgust; ‘When I cooled off and saw how bad almost everyone else was I realized my mistake, and promptly made up my mind I had torn up my last card.’

He put in weeks more practice in preparation for the US Open Championship and a few days at Garden City. Then something happened, ‘I commenced to develop a feeling I was going to win; that feeling never left me, and even when I started the first round 6555, which was enough to dishearten anyone, I never lost confidence.’ He determined to improve during the afternoon, started badly, improved then spent the rest of the match playing a tightly nudged game with MacNamara. On the ninth hole he heard clapping and someone said ‘You are level with MacNamara’ and a friend advised he kept cool. George felt no excitement ‘I might have been made of wood for all the feeling I had, there was just one determined object in my head to win.’

And by George did he win! He heard a great ovation from the Gallery and realised he had done the unthinkable.

He later modestly thanked his ‘brother pro’s’ for their generous congratulations, ‘I had come amongst them almost an entire stranger, and I thank them all for my kind reception.’

George proudly wrote ‘Golf Champion’ as his profession on the 1910 USA census. He played in another fifteen US Opens finishing six times in the top ten, and won both the 1912 Canadian Open and 1918 Minnesota State Open. Other achievements beckoned aside from championships, as the family dotted around America popping across the border to Canada and back to England intermittently with a steadily growing family.

George moved to the Chevy Chase Country club as head pro for seven years, then to Minneapolis, Ohio and Columbus, constantly re-designing and refining the courses he played on.George was a member of the Professional Golfers Association Of America from its beginnings and in 1921 was honoured to become the 3rd president, a post he held for five years.


During his time at Chevy Chase he was also busy designing, manufacturing and promoting his own range of golf clubs.

A well groomed mustachioed George stares from the posters;‘Hit Hard and Look Spiteful, is what you have to do with most clubs, Smile and Take it Easy, is all you need with the Champion Clubs.’During the 1920s George was confident enough with his teaching to give golf lessons on the radio and this seemingly batty idea may have led him to his next innovation.


Sometime before 1930 he had met C Francis Jenkins, a pioneer in motion picture apparatus as well as the development of television. Several years before, George had begun studying the golf swing with an incredibly focused eye, using stereoscope photography to analyse the science of stance, grip and angle.

We can only imagine his excitement at discovering that Jenkins had developed a movie camera that took an incredible 3200 shots a second. At the time an ordinary camera took only 16. George explained to the Sarasota Herald-Tribune that he and Francis could take ‘3200 pictures a second on 200 feet of film’ slowing ‘a golf swing down from something like one second to four minutes’. This is an achievement that OB Keebler described in the paper of 1930 as ‘the most important development, I suppose, in all the history of golf, so far as the teaching of this complex and baffling game is concerned.'

George chose his three subjects expertly, Harry Vardon his mentor and old style golfer, Bobby Jones a newer buck on the block, and Miss Joyce Wethered ‘the greatest feminine golfer who ever lived’.

There were only four of these amazing cameras in the world and the film was produced by the PGAA; it must have cost a fortune considering the amount of film used. Around the same time George, ever the innovator, was experimenting on apparatus to ‘weigh’ a golf swing and by 1939 he had developed a cobbled-together machine that did just that. Along with analysis of champions' heights and weights, he calculated that the optimum swing for a win was 22° between the golfer's body and the golf club, all clearly demonstrated in Popular Science magazine.

Having pieced together George’s articles and quotes, I now have the proof of his early innovation using motion pictures to analyse golf techniques. The film that he worked on showing his three chosen subjects can be found on Youtube

George and Beatrice had 10 surviving children; several went on to be golf pros, teachers and course designers.

George helped shape the future of golf through his application of innovative, practical scientific inventions. Perhaps it is because of his self-effacing, collaborative nature that much of his story has remained undocumented until now?


Heather Tweed is an artist, writer and educator. She has spent five years scouring dusty manuscripts and unopened tomes, bringing to life a remarkable character from the Victorian era.

The Great Golf Hall Of Fame:http://www.gghf.org/MEMBER_lev...

The Right Clubs and Balls:http://library.la84.org/Sports...

Analysis of Golf Swing film from Youtube video (above)

Out of the blue I had a request to write a blog especially for Free UK Genealogy. It was the perfect opportunity to research my ancestor more fully and write the piece I had been thinking about for a couple of years.
Here is the blog on the website Free UK Genealogy