From Michaelangelo to Andy Warhol and Damien Hirst, artists’ assistants have been an accepted part of the art studio system for hundreds of years. Many carrying out manual or repetitive tasks, and some, controversially, rather more. Questioning the authorship of an artwork had rarely been so much in the public eye as the 19th century trial of Belt v Lawes. After picking up a copy of The Graphic of 1882 from a Cardiff antiques emporium, I decided to do a little research into this intriguing case.

On November 18th 1882 more than thirty heavy, life-size busts and sculptures carefully carved and modelled from marble, stone and clay, clustered amongst the wooden benches and desks of the High Court of Justice, Westminster Hall. The single largest exhibit was Hypatia, in her larger than life nakedness, stepping forward from the dais, left hand
brushing through her long hair, right arm, raised palm upwards toward the heavens.
This sober palace of law had literally been turned into a sculpture court.

Witnesses were called forward to have their faces compared for likeness to the jostling busts. Sculpted heads were held up before the Bench and jury, and an array of Royal Academicians were grilled on the intricacies of sculpture techniques, aesthetics and the technicalities of using assistants in the artists studio.

A star studded list of witnesses were paraded in front of the jury including the Pre-Raphaelites,  Lord Frederick Leighton, John Everett Millais, Lawrence Alma Tadema and a relatively young Hamo Thorneycroft. They all espoused what should have been considered invaluable technical knowledge and aesthetic expertise. Most were members of the famed Royal Academy and were experts in their field.
The notorious case of the 'ghost sculptor' was now in full swing.

On August 20th 1881 Vanity Fair had published an article questioning the provenance of sculptures carved and modelled by the sculptor Richard Belt. The article accused Belt, an
artist favoured by Royalty, of passing the work of sculptors François Verhyden and Thomas Brock as his own creation.

Shortly afterwards a letter addressed to the Lord Mayor was printed in Vanity Fair affirming the article to be true. The three signatories, Charles Lawes, Charles Birch and Thomas Brock, were all respected sculptors in their own right. Charles Lawes, or Sir Charles Bennet Lawes-Wittewrong as he was later known, was the man behind the original article. An Eton and Cambridge University educated Sculptor and athlete. His father was the philandering first baronet of Rothampstead Manor, Hertfordshire.

After Cambridge, Lawes honed his craft in London, apprenticed to  J. H. Foley RA, and rented a studio in Chelsea. He was the first president of the Society of British Sculptors,
and his work at the Paris Universal Exhibition of 1878 won him an honorable mention among the hundreds of world class exhibits.

Richard Claud Belt was from a very different background. The son of a journeyman blacksmith and a "domestic worker”, Belt had been educated at a Baroness Burdett-Coutts charity school then worked as a clerk and "machine boy". Nine years Lawes junior, he was indentured to J. H. Foley's sculpture studio as an apprentice alongside Lawes. Due to their different backgrounds and temperaments there may have been some rivalry between the two. Belt had won a most prestigious commission, the Hyde Park memorial to Lord Byron and his precious dog Boatswain. Belt was later said, by some, to be the better sculptor. 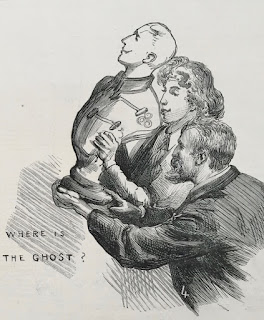 Richard Belt, ‘The Whitechapel Oscar Wilde’, depicted in The Graphic of November 1882 with longer locks, prettier eyelashes and more pouting lips than the Illustrated London News  image published on the same date!

Lawes and Belt both sculpted for grand private and public commissions and portrayed many rich and famous personalities as well as well known classical subjects. Now Belt needed to defend his hard won reputation. He instigated a libel case against Lawes and the trial began in January 1882.

In 1853 Charles Kingsley had written *Hypatia* a fictionalized account of the eponymous pagan philosopher. This explains the humorous illustrated reference to the inanimate figure declining to swear on the bible in The Graphic of 1882. In order to prove Belt’s validity, model and actress Elizabeth Brook, and another young woman who had modelled for the statue, testified that it was only Belt who had stood before them sculpting the piece.

Belt was charismatic and compelling in the stand, the public liked him and he was known as the ‘Whitechapel Oscar Wilde’. The Isle of Wight Observer of January 1883, however, felt this was ‘not pleasantly suggestive’ and described him as ‘bumptious’. His adoring band of female acolytes obviously disagreed.

During November, Belt was hard at work chiselling and carving a bust of Pagliati. Not as may have been expected in his studio, but out of his comfort zone in a makeshift studio off the main courts. Lawes defence team had come up with the idea of forcing him to sculpt ‘live’ in this way so the Court could compare the new work with a previous version. This backfired on Lawes. When the new bust was unveiled a spontaneous round of applause rang from the back of the courtroom.
During December Lawes also accused Belt of forging and using a £5 note. The Judge immediately dismissed the claim.

Forty three weeks of gruelling, sometimes farcical interrogation, ended and the jury came to its conclusion after only 35 minutes of discussion. They had decided that the sculptures had, on the whole, been designed and worked on by Belt and his assistants and that he had not employed a ‘ghost sculptor’ Belt was not guilty and the judge ordered that Lawes pay him £5,000 damages.

In his summing up, the judge intimated that if a ‘layman’ jury could debate on the intricacies of the legal profession then why should it not be the case that amateurs could be better at judging artworks than professional artists. He was obviously not a great aesthete. The jury had been in accord with this sentiment, as was apparent in their decision. If Lawes had banked on relying on his aristocratic roots to find favour with the Judge, he was sorely misled.
Lawes appealed, and the Appeal judges he approached debated the evidence given by the long string of artists at the first trial. The three judges were divided on the merits of a new trial and plumped for the idea of reducing the damages from £5,000 to £500. Surprisingly Belt agreed. Lawes refused. According to a later interview Lawes had tried to settle out of court or to 'bribe me behind the scenes' as Belt put it. The Court immediately ordered a new trial and Lawes objected, presumably questioning their turn of heart. 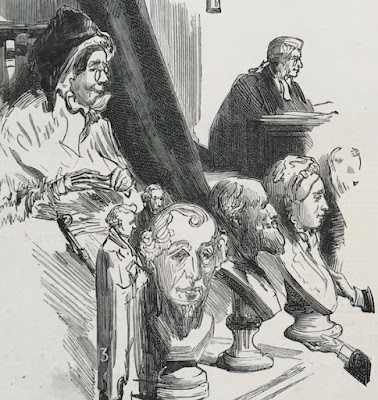 Eleven days of new deliberations by the Court of Appeal brought forth an agreement with the original jury and original damages amount. Lawes was also to pay for the costs of the trial and two appeals.

Surprisingly he filed for bankruptcy. Despite the generous allowance and other monies from his wealthy father, he was declared bankrupt in May 1884. This was rescinded six months later. What his well kept wife, (not to mention the Mistress who was exposed during one part of the trial), thought of this turn of events is not recorded. Belt, the respected sculptor, was exonerated. He also filed for bankruptcy.

In 1886 Belt was again in court, this time for deception and fraud, alongside his brother Walter, a photographer. An array of high class jewellers testified on behalf of Sir William Neville Abdy that various necklaces, bracelets and other expensive items had been sold to him at vastly inflated prices by the Belt brothers whom he had trusted as respected art dealers and artists.

Belt was sentenced for fraud and endured 12 months hard labour, whilst his brother walked free. Belt and Lawes both continued to sculpt although their reputations never quite recovered.

Richard Claude Belt’, Mapping the Practice and Profession of Sculpture in Britain and Ireland 1851-1951
http://sculpture.gla.ac.uk/view/person.php?id=ann_1321801927

Book first published in 2012 from a previously unpublished manuscript at the V&A:
Thomas Brock: Forgotten Sculptor of the Victorian Memorial, Frederick Brock, AuthorHouse (2012)

The Rowers Of Vanity Fair
https://en.m.wikibooks.org/wiki/The_Rowers_of_Vanity_Fair/Lawes_CB

Newspapers and journals including The Times, Western Daily Press etc accessed via
http://infotrac.galegroup.com/default

There is an additional article that I must admit to not having read, as there is a prohibitive charge to access the piece simply for a humble blog, however The Mapping Sculpture article draws on the John Sankey piece:
The sculptor’s ghost - the case of Belt v. Lawes, John Sankey, Sculpture Journal, Vol.16, Issue 2 (December 2007)pp. 84-89 Access via www.liverpooluniversitypress.co.uk 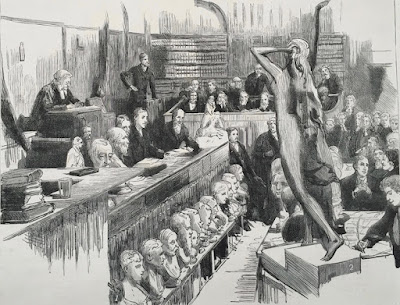 ‘Hypatia Refusing To Kiss The Book’
Richard Belt can be seen writing with a quill to the right of the image.

Posted by HeatherTweed at 19:24 No comments: