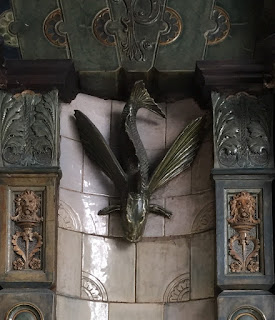 In my last post I wrote a little of the beginnings of Twinings Tea Merchants their bank  and the link with my family tree.
Last week I happened to walk past Lloyds on the Strand and popped in to take a closer look.

Twinings bank was first established to offer a selection of financial facilities to family and friends. Initially part of the thriving tea company it soon became successful enough to become a separate business in its own right.

In 1824 the lone clerk, sat at his high desk squeezed alongside the safe in his tiny office. Delicious aromas of tea and coffee wafted through the door from Devereux Court as he exchanged cheques for cash, weighing out expensive fine tea or coffee as part of the deal if required. 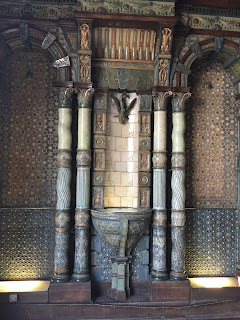 Soon many merchants from outside the family circle were using the expanding bank. New, larger premises were required and the Twining’s built a new establishment beside their tea shop on the Strand in 1835, a very suitable arrangement as their tea trade supported the bank safely through several national financial crises.

As the 19th century progressed many smaller banks combined and swelled their coffers to cover ever larger areas. In 1892 Lloyds put in an offer to take over Twining’s Bank. At the time Richard Twining And Co consisted of six partners, each being listed as ‘Banker and Tea Man’* with Arthur James Tweed and Charles Twining Sidgwick both living at the bank’s address, 215 Strand. 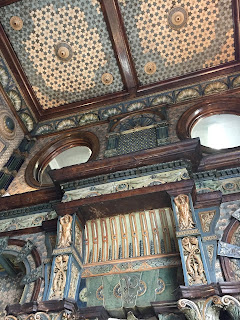 Across the road from Twining’s and the bank, the Royal Courts of Justice long rebuild was completed in 1882. Bigger and grander than its ancient predecessor, it was felt that a new restaurant was needed to match it’s splendour. The chosen spot was at 222-225, where the once famous Palsgrave Head Tavern had stood.

The restaurant failed to attract its target audience of barristers, judges and upper class clients from the Royal Courts of Justice despite the obvious draw of a ventilation system powered by two women on a tandem!The business failed twice and Lloyds took over the building in 1895. Richard Twining became a director at Lloyds and retired two years later at the grand age of 90.

The branch is due to close in August, if you are passing it’s well worth a visit to admire its sumptuous interior, who knows what it’s future holds? 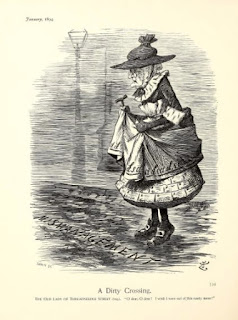 *Supplement to the London Gazette, Feb 1892 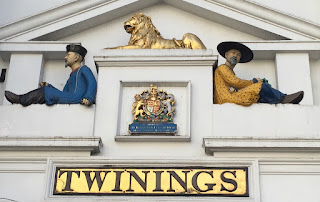 Posted by HeatherTweed at 13:41 No comments:

Twinings has long been associated with fine teas but actually sprang from Tom’s Coffee House. This blog explores a little of that early history and links to Tweed family members who lie within my own ancestral tree.

Walking along the Strand in 1706 a waft of aromatic coffee and stimulating chit chat may have enticed you to take a little diversion to savour the delights of Tom’s Coffee House*  tucked on the corner of the Strand and Devereaux Court. The rival Grecian Coffee House opposite boasted Sir Isaac Newton, Sir Hans Sloan and Dr Halley, calculator of the orbit of the eponymous comet, amongst its patrons. The air of the court was thick with learned argument and debate.

Thomas Twining was born in Painswick, Gloucestershire and was nine when his father Daniel moved
the family to London. Thomas was apprenticed to a weaver but gave that up to work for early importer of tea and East India merchant, Thomas D’Aeth. He bought Tom’s Coffee House from Thomas D’Aeth in 1706 and began selling expensive tea alongside his coffee brews.

The business quickly took off and his fine tea blends were soon outselling the coffee.
By 1717 he had expanded the business to three interlinked houses   around the original premises, serving hot tea in tiny china cups for a shilling and, offering exquisitely combined and single estate, dried blends to a top ranking customer list. Over the decades, Jane Austin, Josiah Wedgwood and Sir Christopher Wren ordered their tea from the shop.

Coffee Houses were strictly off limits to women so they resorted to sitting in their carriages whilst a groom or butler fetched the desired brew.
Artist, William Hogarth struggled financially as disreputable printers sold copies of his work without paying royalties. He built up a sizeable bill with Twinings and, reputedly, struck a bargain with Thomas. Hogarth painted a portrait of Thomas and thus cancelled out the debt.


The Twining dynasty holds some interesting descendants, including philanthropist, Elizabeth Twining who painted beautiful botanical watercolours and wrote “Ten Years in a Ragged School and Readings for Mothers Meetings”.
Her sister Louisa was also an artist and art historian with an active interest in social reform.

In 1856 Thomas’s Great, Great Granddaughter Frances Mary Twining married Rev Henry Wilson Tweed, my 6th cousin 5 times removed.
Their son Arthur James Tweed entered the family business and was one of six partners in 1892. He was also involved with the Twining banking business, Twining & Co. which merged with Lloyds in 1892.
Frances, or Fanny as she was known, sadly died in 1867 aged only 34. Henry went on to marry the splendidly monikered Louisa Anna Maria Von Stilfried du Rattonitz.

Many Twining family members were born and lived at 215 and 216 Strand, as well as owning properties in Twickenham and around the country.

Today it is the smell of crisp, aromatic tea leaves infused with bergamot or rose that pulls you through the sculpture embelished  doorway into a surprisingly narrow space, neatly packed with wooden shelves, copper dispensers with their own little tea scoops, and pristine glass cabinets. Gilt framed oil portraits of Twining ancestors stare down at a stream of customers from all parts of the globe, perhaps proud that the company holds the record for the oldest, unaltered, continuously used trademark in the world a mere 230 years after it was first designed.

*not to be confused with Tom’s Coffee House on Russell Street where owner, poor Thomas West jumped to his death in 1722 deranged in an agony of gout.


Posted by HeatherTweed at 18:42 No comments: